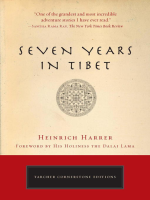 Description
In this vivid memoir that has sold millions of copies worldwide, Heinrich Harrer recounts his adventures as one of the first Europeans ever to enter Tibet. Harrer was traveling in India when the Second World War erupted. He was subsequently seized and imprisoned by British authorities. After several attempts, he escaped and crossed the rugged, frozen Himalayas, surviving by duping government officials and depending on the generosity of villagers for food and shelter.Harrer finally reached his ultimate destination-the Forbidden City of Lhasa-without money, or permission to be in Tibet. But Tibetan hospitality and his own curious appearance worked in Harrer?s favor, allowing him unprecedented acceptance among the upper classes. His intelligence and European ways also intrigued the young Dalai Lama, and Harrer soon became His Holiness?s tutor and trusted confidant. When the Chinese invaded Tibet in 1950, Harrer and the Dalai Lama fled the country together. This timeless story illuminates Eastern culture, as well as the childhood of His Holiness and the current plight of Tibetans. It is a must-read for lovers of travel, adventure, history, and culture. A motion picture, under the direction of Jean-Jacques Annaud, will feature Brad Pitt in the lead role of Heinrich Harrer.
Also in This Series