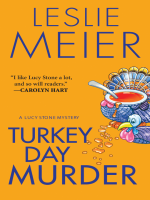 Description
Once again, Leslie Meier gives mystery fans a reason to give thanks for the eccentric charms of Tinker's Cove and the intriguing exploits of its resident amateur sleuth, Lucy Stone.Turkey Day MurderTinker's Cove has a long history of Thanksgiving festivities, from visits with TomTom Turkey to the annual Warriors high school football game and Lucy Stone's impressive pumpkin pie. But this year, someone has added murder to the menu, and Lucy intends to discover who left Metinnicut Indian activist Curt Nolan deader than the proverbial Thanksgiving turkey—with an ancient war club next to his head.The list of suspects isn't exactly a brief one. Nolan had a habit of disagreeing with just about everybody he met. Between fixing dinner for twelve and keeping her four kids from tearing each other limb from limb, Lucy has a pretty full plate already. So what's a little investigation? But if she's not careful, she just may find herself served up as a last-minute course, stone-cold dead with all the trimmings. . ."I like Lucy Stone a lot, and so will readers." —Carolyn Hart"Meier writes with sparkle and warmth." —Chicago Sun Times
Also in This Series