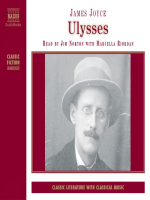 Description
Ulysses is one of the greatest literary works in the English language. In his remarkable tour de force, Joyce catalogues one day - 16 June 1904 - in immense detail as Leopold Bloom wanders through Dublin, talking, observing, musing - and always remembering Molly, his passionate, wayward wife. Set in the shadow of Homer's Odyssey, internal thoughts - Joyce's famous stream of consciousness - give physical reality extra colour and perspective. This long-awaited unabridged recording of James Joyce's Ulysses is released to coincide with the hundredth anniversary of 'Bloomsday'. Regarded by many as the single most important novel of the twentieth century, the abridged recording by Norton and Riordan released in 1994, the first year of Naxos AudioBooks, is a proven bestseller. Now the two return - having recorded most of Joyce's other work - in a newly recorded unabridged production directed by Joyce expert Roger Marsh. The recorded text is taken from the 1937 Bodley Head edition.
Also in This Series