Catalog The Singing of the Dead »  Books » 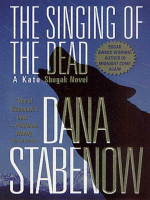 Description
In Singing of the Dead, the next installment in Dana Stabenow's acclaimed crime series, Kate Shugak hires onto the staff of a political campaign to work security for a Native woman running for state senator. The candidate has been receiving anonymous threats, and Kate, who went to college with two of the staffers, is to become her shadow, watching the crowds at rallies and fundraisers. But just as she's getting started the campaign is rocked by the murder of their staff researcher, who, Kate discovers, was in possession of some damning information about the pasts of both candidates. In order to track the killer, Kate will have to delve into the past, in particular the grisly murder of a "good-time girl" during the Klondike Gold Rush in 1915. Little can she guess the impact a ninety-year-old unsolved case could have on a modern-day psychotic killer.
Also in This Series