Library account access and other online library services (eBooks, databases, etc.) are currently unavailable. We are working on a solution. 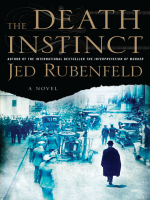 Description
A spellbinding literary thriller about terror, war, greed, and the darkest secrets of the human soul, by the author of the million-copy bestseller The Interpretation of Murder. Under a clear blue September sky, America's financial center in lower Manhattan became the site of the largest, deadliest terrorist attack in the nation's history. It was September 16, 1920. Four hundred people were killed or injured. The country was appalled by the magnitude and savagery of the incomprehensible attack, which remains unsolved to this day. The bomb that devastated Wall Street in 1920 explodes in the opening pages of The Death Instinct, Jed Rubenfeld's provocative and mesmerizing new novel. War veteran Dr. Stratham Younger and his friend Captain James Littlemore of the New York Police Department are caught on Wall Street on the fateful day of the blast. With them is the beautiful Colette Rousseau, a French radiochemist whom Younger meets while fighting in the world war. A series of inexplicable attacks on Rousseau, a secret buried in her past, and a mysterious trail of evidence lead Young, Littlemore, and Rousseau on a thrilling international and psychological journey-from Paris to Prague, from the Vienna home of Dr. Sigmund Freud to the corridors of power in Washington, D.C., and ultimately to the hidden depths of our most savage instincts. As the seemingly disjointed pieces of what Younger and Littlemore learn come together, the two uncover the shocking truth behind the bombing. Blending fact and fiction in a brilliantly convincing narrative, Jed Rubenfeld has forged a gripping historical mystery about a tragedy that holds eerie parallels to our own time.
Also in This Series