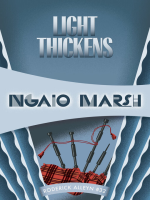 Description
The bad news: This is the last in Ngaio Marsh's marvelous "Inspector Alleyn" series. The good: It's one of her very best. The secret to Light Thickens' success may lie in its combination of some of Marsh's greatest passions, including her native New Zealand –in the person of, unusually, a Maori character – and the theater. Indeed, the plot centers on a production of...well, let's skirt disaster by calling it "the Scottish play," a play that Dame Ngaio produced and directed several times. Among theater folk, the Scottish play is considered unlucky, so much so that tradition requires anyone who utters its proper name backstage to leave the building, spin around, spit, curse, and then request permission to re-enter. For Ngaio Marsh, however, it seems to have been quite the opposite: Light Thickens is "a fine swansong," said England's Observer, and the Los Angeles Times agreed, saying "No playwright could devise a better curtain" than the one Dame Ngaio chose for her own career.
Also in This Series