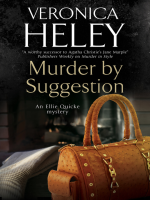 Description
Murder is no joke, as Ellie Quicke is only too aware in this absorbing and entertaining mystery. Ellie Quicke is shocked when her daughter, Diana, turns up at her door with a suitcase in tow. Bunny Brewster has died of an overdose, and Diana's husband, Evan, is convinced that she is responsible for his friend's death. It seems that Diana and four other neglected, bored wives of Evan's friends recently joked about ways to kill their husbands. Diana's suggested method of murder involved muddling up pills – could this be how Bunny died, or was it just a tragic accident? All five women are soon causing havoc at Ellie's house, but a further distressing development confirms Ellie's instinct that there's more to this than meets the eye. With the safety of her nearest and dearest at risk, can Ellie work out who is responsible, and why?
Also in This Series