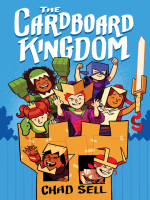 Description
Perfect for fans of Raina Telgemeier, Awkward, and All's Faire in Middle School, this graphic novel follows a neighborhood of kids who transform ordinary cardboard into fantastical homemade costumes as they explore conflicts with friends, family, and their own identity."A breath of fresh air, this tender and dynamic collection is a must-have." —Kirkus, StarredWelcome to a neighborhood of kids who transform ordinary boxes into colorful costumes, and their ordinary block into cardboard kingdom. This is the summer when sixteen kids encounter knights and rogues, robots and monsters—and their own inner demons—on one last quest before school starts again. In the Cardboard Kingdom, you can be anything you want to be—imagine that!The Cardboard Kingdom was created, organized, and drawn by Chad Sell with writing from ten other authors: Jay Fuller, David DeMeo, Katie Schenkel, Kris Moore, Molly Muldoon, Vid Alliger, Manuel Betancourt, Michael Cole, Cloud Jacobs, and Barbara Perez Marquez. The Cardboard Kingdom affirms the power of imagination and play during the most important years of adolescent identity-searching and emotional growth.NAMED ONE OF THE BEST BOOKS OF THE YEAR BY KIRKUS REVIEWS * THE NEW YORK PUBLIC LIBRARY * SCHOOL LIBRARY JOURNAL * A TEXAS BLUEBONNET 2019-20 MASTER LIST SELECTION"There's room for everyone inside The Cardboard Kingdom, where friendship and imagination reign supreme." —Ingrid Law, New York Times bestselling author of Savvy"A timely and colorful graphic novel debut that, like its many offbeat but on-point characters, marches to the beat of its own cardboard drum." —Tim Federle, award-winning author of Better Nate Than Ever
Also in This Series

Formats
Kindle Book
Works on Kindles and devices with a Kindle app installed.
Sample  Place Hold OverDrive
OverDrive Read
Sample  Place Hold OverDrive
Need Help?
If you are having problem transferring a title to your device, please fill out this support form or visit the library so we can help you to use our eBooks and eAudio Books.
More Like This

There are 6 holds on this title.