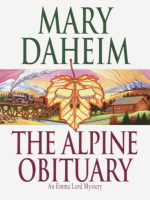 Description
SPECIAL EDITION: MURDERNot even in Alpine, Washington, could the death of octogenarian Jack Froland be considered big news—except by his drinking buddies at Mugs Ahoy. But that suddenly changes when in the middle of the funeral, Jack's widow hysterically insists that he was murdered. Emma Lord, publisher of The Alpine Advocate, who is already investigating a threatening letter received by the town's beautiful blonde judge, now suspects she has two hot stories to unravel. Backed by her House and Home editor, that bottomless repository of scandal Vida Runkel, she prepares for a triple-threat special: murder, blackmail, and—as wildfire sweeps the mountainside— possible arson as well. But success will not come cheap. With a killer roaming the woods, it may cost Emma her life. . . .READ ALL ABOUT IT!The Alpine AdvocateNovels by Mary Daheim
Also in This Series