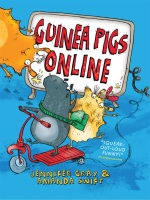 Description
In this hilarious adventure for elementary school readers, a team of lovable, fuzzy guinea pigs gets online to solve their mysteries.Fuzzy the guinea pig is a great friend to have—he's always cheerful, he cooks like a pro (his specialty is ketchup and dish soap), and he loves to surf the web. His stylish hutch-mate Coco is Fuzzy's best friend, though even she can't understand his fascination with computers.When Fuzzy goes missing, though, Coco is forced to get online for answers. On the social site Micespace she learns that her friend could be in terrible danger, so Coco assembles an extraction team to get him back: Terry, a technology whiz whose computer skills are second to none; Banoffee, a mother of fourteen with the organizational and motivational powers to match; and Eduardo, the heroic (and very handsome) Peruvian freedom fighter. Will Coco and her guinea pig commandos find a way to rescue Fuzzy and get back home alive?
Also in This Series