Catalog The Edge of Nowhere »  eBook » 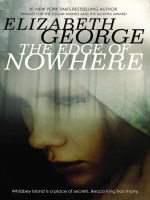 Description
The Edgar and Agatha Award-nominated novel from #1 New York Times bestseller Elizabeth George!On Whidbey Island, nothing is as it seems. Becca's ability to hear "whispers"—the thoughts of others—has put her at risk from her criminal stepfather. So Becca escapes to Whidbey Island, where she hopes to find safety. But when a terrible accident affects everyone on the island, Becca finds herself wrapped up in a complicated situation, and she isn't the only one with a secret.This compelling coming-of-age story, the first of an ongoing sequence of books set on Whidbey Island, has elements of mystery, the paranormal, and romance."Blending mystery, family drama, teen angst and a dose of paranormal, this novel rises above many in the young adult genre." —USATODAY.com"George has hit the nail on the proverbial head with this action-packed, mysterious, and somewhat 'creepy' novel." —Suspense MagazineAn Edgar Award NomineeAn Agatha Award Nominee From the Trade Paperback edition.
Also in This Series