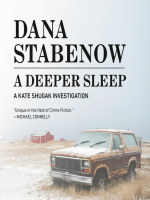 Description
In A DEEPER SLEEP, her first novel since Blindfold Game, the stand-alone political thriller that made Dana Stabenow a New York Times bestseller, the author returns to the popular and award-winning Kate Shugak series.Kate, a private investigator, has been working on a case for the Anchorage District Attorney involving the murder of a young woman by her husband, a man named Louis Deem. Deem has been the subject of investigation before, and he's never been convicted of a crime. But Kate and her on-again, off-again lover, state trooper Jim Chopin, who arrested Deem, are convinced that this time it's different, and he'll finally be punished for his actions. When the jury returns a verdict of not guilty, Kate and Jim are devastated, and like the rest of the citizens of Niniltna, Alaska, certain that a man has gotten away with murder. They can't help but think that it's only a matter of time before he's in the frame for another killing. Sure enough, a few weeks later a shooting leaves two dead in an apparent robbery. But this time Kate and Jim have a witness, and they're not going to let Louis Deem get away again. Or will he?Dana Stabenow, Edgar Award®-winning author and New York Times bestselling thriller writer, delivers a gripping nail-biter about one town's search for justice——at any cost.From the Compact Disc edition.
Also in This Series