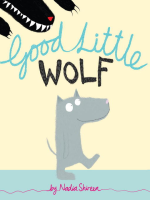 Description
Rolf, a small, gentle wolf, lives with Mrs. Boggins, who tells him he is a good little wolf. But when he meets up with a large, ferocious wolf, he is told that he isn't a real wolf. Wolves aren't little and good—they are big and bad. To prove he is a real wolf, the old wolf tells Rolf he must perform certain tasks, such as blowing down a little pig's house. Rolf is a total failure . . . until the big bad wolf urges him to do something unspeakable to old Mrs. Boggins. Then the good little wolf proves that he can stand up to the big bad bully. Or so it seems. More mature readers may find a different ending that could lead to a great discussion! Using familiar storybook characters and an endearing new hero, Nadia Shireen makes her debut in this winning picture book.
Also in This Series