Catalog Beyond the Miracle Worker »  Books » 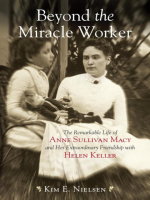 Description
A moving portrait of Anne Sullivan Macy, teacher of Helen Keller—and a complex, intelligent woman worthy of her own spotlightAfter many years, historian and Helen Keller expert Kim Nielsen realized that she and her peers had failed Anne Sullivan Macy. While Macy is remembered primarily as Helen Keller's teacher and a straightforward educational superhero, the real story of this brilliant, complex, and misunderstood woman has never been completely told. Beyond the Miracle Worker seeks to correct this oversight, presenting a new tale about the wounded but determined woman and her quest for a successful, meaningful life.Born in 1866 to poverty-stricken Irish immigrants, Macy suffered part of her childhood in the Massachusetts State Almshouse at Tewksbury. Seeking escape, in love with literature, and profoundly stubborn, she successfully fought to gain an education at the Perkins School for the Blind. She went on to teach Helen Keller, who became a loyal and lifelong friend. As Macy floundered with her own blindness, ill health, depression, and marital strife in her later years, she came to lean on her former student for emotional, physical, and economic support.Based on privately held primary source material—including materials at both the American Foundation for the Blind and the Perkins School for the Blind—Beyond the Miracle Worker is revelatory and absorbing, unraveling one of the best known and least understood friendships of the twentieth century.
Also in This Series

Kim E. Nielsen. (2009). Beyond the Miracle Worker: The Remarkable Life of Anne Sullivan Macy and Her Extraordinary Friendship with Helen Keller. Beacon Press.

Kim E. Nielsen. 2009. Beyond the Miracle Worker: The Remarkable Life of Anne Sullivan Macy and Her Extraordinary Friendship With Helen Keller. Beacon Press.

Kim E. Nielsen, Beyond the Miracle Worker: The Remarkable Life of Anne Sullivan Macy and Her Extraordinary Friendship With Helen Keller. Beacon Press, 2009.

Beyond the Miracle Worker, the first biography of Macy in nearly fifty years, complicates the typical Helen-Annie "feel good" narrative in surprising ways. By telling the life from Macy's perspective-not Keller's-the biography is the first to put Macy squarely at the center of the story. It presents a new and fascinating tale about a wounded but determined woman and her quest for a successful, meaningful life.