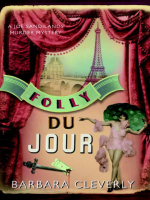 Description
Praise for Barbara Cleverly: "Spectacular and dashing, spellbinding."—The New York Times Book Review "Smashing . . . marvelously evoked."—Chicago Tribune "A historical mystery that has just about everything."—Denver Post "Cleverly maintains the high standards set by earlier Sandilands tales, blending a sophisticated whodunit with full-blooded characters and a revealing look at her chosen time and place."—Publishers Weekly (starred) "Atmospheric . . . intricately plotted."—Kirkus Reviews "Evocative narrative, sensitive characterizations, artful dialogue, and masterly plottings."—Library Journal "Cleverly combines a colorful historical setting with a complex plot and well-developed characters."—Booklist "Delightfully surprising."—Mystery News This seventh book in the Joe Sandilands murder mystery series is set at the Folies-Bergère, Paris, in December 1926. Joe hurries to the assistance of an old friend who has been arrested for murder there. In a cell at the Quai des Orfèvres, he meets with Sir George Jardine, still in the evening clothes stained with the blood of the dead man. The only other witness, a blonde who was sharing the victim's box, has vanished. Joe receives assistance from an entirely unexpected quarter—Francine, a young usherette, clawing her way into the world of the Paris Music Hall. She becomes Joe's guide through this treacherous place, where Joe is sure the killer is lurking. Barbara Cleverly was born in northern England, graduated from Durham University, and now lives in Cambridge. Her debut, The Last Kashmiri Rose, was a New York Times Notable Book of 2002.From the Hardcover edition.
Also in This Series

Formats
Adobe EPUB eBook
Works on all eReaders (except Kindles), desktop computers and mobile devices with with reading apps installed.
Sample Sample Check Out OverDrive
OverDrive Read
Sample Sample Check Out OverDrive
Need Help?
If you are having problem transferring a title to your device, please fill out this support form or visit the library so we can help you to use our eBooks and eAudio Books.
More Like This