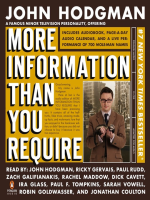 Description
The New York Times bestseller by Famous Minor Television Personality John Hodgman—The Daily Show's "Resident Expert" and the "PC" in the iconic Apple ads—picks up exactly where his first book left off. In fact, "the new volume is in every way a continuation of Areas of My Expertise, except in the ways it's clearly superior." (The Onion AV Club) In 2005, John Hodgman published his first compendium of Complete World Knowledge, The Areas of My Expertise, a handy volume of fake trivia and made-up facts. Hodgmania was born. Virtually overnight, John Hodgman was whisked from tweedy obscurity to the high ether of minor celebrity. And from his strange new vantage point as a Famous Minor Television Personality, Hodgman realized that there is some world knowledge yet to be documented. And so he returned to exactly where he had left off—namely, page 256 of the paperback edition of The Areas of My Expertise. And he brought with him: MORE INFORMATION THAN YOU REQUIRE. Which, naturally, begins on page 257. Like its predecessor, More Information Than You Require consists of brief articles, overlong lists, frighteningly complex charts, and beguiling narratives on new and familiar themes such as: THE PAST (because there is always more of it) THE FUTURE (because they say there is still some left) MOLE-MEN (including a list of 700 Mole-man names) GAMBLING, THE SPORT OF THE ATHSMATIC MAN (including hermit crab racing) CRYPTOGEOGRAPHY (including Canada) HOW TO BE A FAMOUS MINOR TELEVISION PERSONALITY (Hint: Go on television) AND NOW, the relatively pocket-sized and inexpensive paperback edition includes even more.MORE INFORMATION THAN YOU REQUIRE, updated to include the very latest in implausibility. PLUS!: This paperback edition includes a special self-expanding fold-out edition of THE TAXONOMY OF COMPLETE WORLD KNOWLEDGE, which you have probably never seen before because it has been carefully hidden. UNTIL NOW.Look out for John Hodgman's latest book, Vacationland, available from Viking in Fall 2017.
Also in This Series