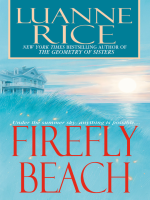 Description
Under the summer sky, anything is possible....Author of the acclaimed novels Cloud Nine and Follow the Stars Home, Luanne Rice returns with another moving portrait of a family in crisis—as three sisters come face-to-face with the past and find in each other the courage to go on.Coolly sophisticated and steadfastly single, Caroline Renwick has always been the sister everyone could count on. As she and Clea and Skye gathered at Firefly Hill, their childhood home, Caroline thought that they had all put the past behind them. But as summer gets under way, a mysterious man arrives—a man who has the power to bring it all back....Joe Connor was only six when his father died at Firefly Hill. Though he and Caroline had never met, the five-year-old girl reached out to him. They became pen pals and friends, until a teenaged Joe finally learned the truth about what had happened to his father that night. Now, after years of silence, Joe is suddenly here ... and Caroline still feels a connection. But she can't help but wonder if this handsome man holds the key to her family's healing—or its destruction. And in his presence, how long will she be able to guard her heart?
Also in This Series