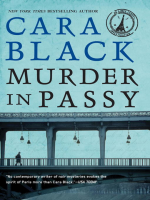 Description
The eleventh Aimée Leduc investigation set in ParisBusiness is booming for Parisian private investigator Aimée Leduc. But she finds time to do a favor for her godfather, Commissaire Morbier, who asks her to drop by the gorgeous Passy home of his girlfriend, Xavierre d'Eslay, a haut bourgeois matron of Basque origin. Xavierre has been so busy with her daughter's upcoming wedding that she has stopped taking Morbier's calls, and he's worried something serious is going on. When Aimée crashes the rehearsal dinner, Xavierre is discovered strangled in her own yard, and circumstantial evidence makes Morbier the prime suspect. To vindicate her godfather, Aimée must find the real killer. Her investigation leads her to police corruption, radical Basque terrorists, and a kidnapped Spanish princess.From the Trade Paperback edition.
Also in This Series