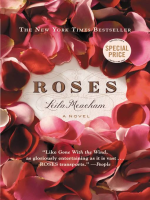 Description
p.p1 {margin: 0.0px 0.0px 8.0px 0.0px; font: 12.0px 'Times New Roman'} Two East Texas families must deal with the aftermath of a marriage that never happened leading to deceit, secrets, and tragedies in a sweeping multigenerational Southern saga "with echoes of Gone with the Wind." (Publishers Weekly)Spanning the 20th century, the story of Roses takes place in a small East Texas town against the backdrop of the powerful timber and cotton industries, controlled by the scions of the town's founding families. Cotton tycoon Mary Toliver and timber magnate Percy Warwick should have married but unwisely did not, and now must deal with consequences of their momentous choice and the loss of what might have been—not just for themselves but for their children, and their children's children.With expert, unabashed, big-canvas storytelling, Roses covers a hundred years, three generations of Texans, and the explosive combination of passion for work and longing for love.