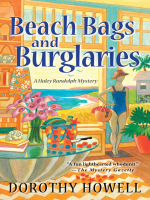 Description
Part-time sleuth and full-time fashionista Haley Randolph just won an all-expenses-paid vacay at the Rowan Resort, a ridiculously exclusive island getaway that caters to the whims of millionaires, royalty, and Hollywood A-listers. With her three BFF's—Marcie, Bella, and Sandy—along for the ride, the only thing she's missing is the Sea Vixen, the season's hottest beach bag. . .The island has everything Haley imagined: pristine beaches, posh accommodations, and possibly Brad Pitt. But trouble soon looms on the horizon when Jaslyn Gordon, a maid at the island resort, goes missing. And while practically looting the resort for a Sea Vixen beach bag, Haley of course finds the maid—on the beach. . .and clearly dead. Everyone at the resort says Jaslyn's death was just an accident, but Haley thinks there's a lot going unsaid. . .especially when she spots hunky FBI agent Luke Warner. He claims to be on the island only for a wedding but Haley's not buying it. Haley's faced down clever criminals before and always come out on top, but this malicious murderer might be too crafty. And though she's dying to get her hands on a Sea Vixen, she also wants to live long enough to be seen with it!Praise For Dorothy Howell And Her Haley Randolph Mysteries! Evening Bags And Executions"Enjoyable. . .an unlikely but engaging sleuth." —Publishers WeeklyTote Bags And Toe Tags"The well-crafted plot, humor, and designer details will appeal to fans of Laura Levine and MaryJanice Davidson." —BooklistClutches And Curses"Frothy. . ..The well-crafted plot offers plenty of red herrings." —Publishers WeeklyShoulder Bags And Shootings "Recommend this series to fans of lightweight, humorous mysteries." —Booklist Purses And Poison"A treat for those with a passion for fashion. No doubt this sassy heroine's in for a long run." —Kirkus ReviewsHandbags And Homicide"Fashionistas take note: Dorothy Howell's delightful Handbags and Homicide dangles shopping to die for and a murder in store in a breezy debut mystery as sure to please as a Notorious handbag." —Carolyn Hart, author of Death Walked In"Dorothy Howell is one funny lady. I laughed out loud as I followed Haley's adventures tracking down both a killer and a Louis Vuitton organizer in this fast-paced, fun-filled page turner. I recommend it highly." —Laura Levine, author of Death of a Neighborhood Witch
Also in This Series