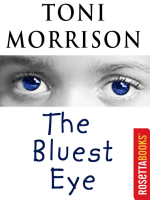 Description
The Bluest Eye is the story of eleven-year-old Pecola Breedlove - a black girl in an America whose love for its blond, blue-eyed children can devastate all others - who prays for her eyes to turn blue: so that she will be beautiful, so that people will look at her, so that her world will be different. This is the story of the nightmare at the heart of her yearning and the tragedy of its fulfillment.


The Bluest Eye, published in 1969, is the first of Toni Morrison's ten novels. It announced the arrival of one of the most important literary voices of her time and has remained for nearly thirty-five years her consistently best-read book. Oprah's Book Club selected The Bluest Eye in 2000, assuring its yet wider readership.
Also in This Series

Formats
Adobe PDF eBook
Check Out OverDrive
Need Help?
If you are having problem transferring a title to your device, please fill out this support form or visit the library so we can help you to use our eBooks and eAudio Books.
More Like This