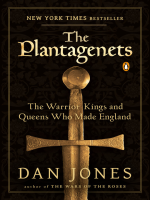 Description
The New York Times bestseller that tells the story of Britain's greatest and worst dynasty—"a real-life Game of Thrones" (The Wall Street Journal)—by the author of The TemplarsThe first Plantagenet kings inherited a blood-soaked realm from the Normans and transformed it into an empire that stretched at its peak from Scotland to Jerusalem. In this epic narrative history of courage, treachery, ambition, and deception, Dan Jones resurrects the unruly royal dynasty that preceded the Tudors. They produced England's best and worst kings: Henry II and his wife Eleanor of Aquitaine, twice a queen and the most famous woman in Christendom; their son Richard the Lionheart, who fought Saladin in the Third Crusade; and his conniving brother King John, who was forced to grant his people new rights under the Magna Carta, the basis for our own bill of rights. Combining the latest academic research with a gift for storytelling, Jones vividly recreates the great battles of Bannockburn, Crécy, and Sluys and reveals how the maligned kings Edward II and Richard II met their downfalls. This is the era of chivalry and the Black Death, the Knights Templar, the founding of parliament, and the Hundred Years' War, when England's national identity was forged by the sword.
Also in This Series

Dan Jones. (2013). The Plantagenets: The Warrior Kings and Queens Who Made England. Penguin Publishing Group.

Dan Jones. 2013. The Plantagenets: The Warrior Kings and Queens Who Made England. Penguin Publishing Group.

Dan Jones, The Plantagenets: The Warrior Kings and Queens Who Made England. Penguin Publishing Group, 2013.

Dan Jones. The Plantagenets: The Warrior Kings and Queens Who Made England. Penguin Publishing Group, 2013. Web.