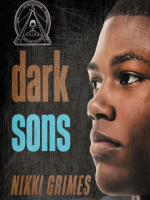 "The elemental connections and the hope ("You made it / in the end / and so will I') will speak to a wide audience."—Booklist, starred review

A guy whose father
ripped his heart out too.
Me and you, Ishmael,
we're brothers,
two dark sons.

Betrayed, lost, and isolated, the perspectives of two teenage boys—modern-day Sam and biblical Ishmael—unite over millennia to illustrate the power of forgiveness.
Also in This Series