Catalog Dark of the Moon »  eBook » 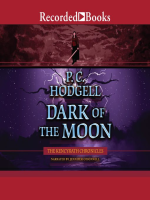 Description
"Tai-tastigon is burning. The whole city is in an uproar. And the cause, Jame, and her friend Marc have fled. They are making their way through mountain passes, far too late in the season, hoping to find Jame's brother Tori somewhere on the other side. Nothing ever goes easily for Jame, least of all this journey. As hints of the past she has forgotten-of dark and horrid years in the house of Gerridon, betrayer of her people, the Kencyrath, and her god-come to the surface, she encounters changers from the house of Gerridon, wanting to bring her back into that dark place. Arrin-ken, catlike creatures who are nevertheless a part of her own people, find and judge her. Bandits, brigands and strange remnants from the past of her people-which suggest a dim future for them, their god and their hope of defeating the great enemy, Perimal Darkling-arise to haunt her. But her determination to find her brother and to avoid falling into eternal darkness only grows stronger. Meanwhile Tori, who is Highlord of the Kencyrath, leads the wayward lords of the Kencyrath with uneasy grace. He is a compromise for them, a way of avoiding endless battle between them. But he can bind them together only so long as he can tread a narrow way between their varied needs and desires. When a vast and unexpected danger threatens, he must call up the host-the troops that each lord must muster-but in so doing he threatens his own position and his sanity, for he cannot avoid the attention this calls to him, attention that seems to bring changers who want to kill him, and odd nightmares that seem to suggest a future he does not want and the reappearance of a sister he both loves and fears. Jame and Marc appeared first in God Stalk, where Jame discovered that she had odd powers and that she did not need a past to change forever the future of those around her. In this second book, she is just as hard on her friends, and her enemies, as she was in the first. But knowing her past, knowing how near she is always to the brink of a personal disaster she cannot accept, she must now consider each step she takes more carefully. This does not mean that either she, or for that matter, Tori, will ever be less than wild and unexpected. It only means that both must count and accept the cost of their actions. It is a way of living neither is prepared for."
Also in This Series