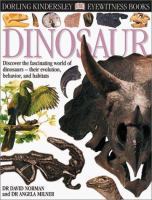 Description
Here is a spectacular and informative new look at the fascinating world of dinosaurs. Stunning real-life photographs of dinosaur bones, skulls, teeth and more offer a unique "eyewitness" view of these beasts of the prehistoric world - how big they were, how they lived and how they behaved. See a dinosaur nest complete with eggs, a skull that is 120 million years old, the size of a dinosaur footprint, the food that dinosaurs ate, and a giant claw that could catch fish. Learn how dinosaurs were like birds, which dinosaur was a cannibal, how dinosaurs digested their food, what horns and frills were for, and why dinosaurs suddenly disappeared. Discover who found the first dinosaur, how some dinosaurs bellowed, why some dinosaurs were armor-plated, how Tyrannosaurus rex killed its prey, which dinosaurs were intelligent, why dinosaurs' tails were lethal weapons, and much, much more.
Also in This Series

Note! Citation formats are based on standards as of July 2010. Citations contain only title, author, edition, publisher, and year published. Citations should be used as a guideline and should be double checked for accuracy.
Staff View
Grouped Work ID:
8cf74649-11e7-a46e-0dc4-f8c00a866015
Go To GroupedWorkView in Staff Client