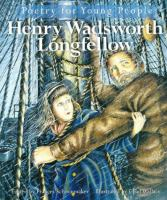 Description
Children instinctively love poetry, with its appealing mixture of rhythm and rhyme. And Henry Wadsworth Longfellow, with his suspenseful narrative verse, deceptively simple structure, and powerful images of 19th-century United States, makes an especially suitable subject for the critically acclaimed Poetry for Young People series. Brilliant, specially commissioned artwork brings to life all the atmosphere, drama, and emotion of his writing: the vital energy of "The Village Blacksmith," the urgency of "Paul Revere's Ride," and the sorrow of "The Wreck of the Hesperus." An opening essay tells of Longfellow's life: his childhood in Maine, his family history (the Longfellows played a major role in New England politics), his success as a professor of foreign languages, and his often-tragic personal life. More than just a biography, it reveals the inspiration for many of Longfellow's most popular works. Nearly 30 poems appear, most in their entirety, including "The Arrow and the Song," "The Rainy Day," "Woods in Winter," "The Forest Primeval" (from "Evangeline"), "Hiawatha's Childhood" (from "Song of Hiawatha"), "A Psalm of Life," and the abolitionist "The Witnesses." As always in this series, supplementary word definitions give children the knowledge they need to fully understand the poems. 48 pages (all in color), 8 1/2 x 10.
Also in This Series

Note! Citation formats are based on standards as of July 2010. Citations contain only title, author, edition, publisher, and year published. Citations should be used as a guideline and should be double checked for accuracy.
Staff View
Grouped Work ID:
ec8eb253-f3a5-cf3c-827d-121d99a90981
Go To GroupedWorkView in Staff Client