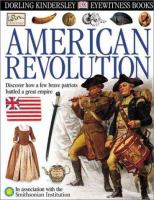 Description
Featuring an extra-sturdy library binding! Be an eyewitness to the thrilling American war for independence: the battles and leaders, soldiers and heroes, scoundrels and patriots. It's all here in this ultimate visual guide that show you how it really was. See a continental solder's musket, a spy's hollow "silver bullet", Washington's sword, a bullet-riddled battle flag, the Liberty Bell, the Declaration of Independence. Learn why Washington was commander-in-chief, how the Declaration of Independence was written, how Benedict Arnold was at first a patriot hero, how solders were drilled, who the Loyalists were, how France helped win American liberty. Discover how Betsy Ross sewed the Stars and Stripes, the secrets of spies and traitors, why it was Breed's not Bunker Hill, why King George admired Washington, why Yorktown was not the end of the Revolution, and much, much more.
Also in This Series

Note! Citation formats are based on standards as of July 2010. Citations contain only title, author, edition, publisher, and year published. Citations should be used as a guideline and should be double checked for accuracy.
Staff View
Grouped Work ID:
3554ea8c-16da-5bbd-8653-fa5517c26268
Go To GroupedWorkView in Staff Client