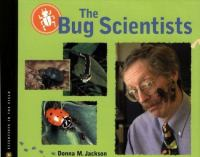 Description
Small is beautiful--or so the bug scientists of the world believe. Insects, they say, boast qualities the rest of us have perhaps overlooked. They are among the earth's best fliers and farmers. They have survived and adapted for 350 million years, whereas we humans have been around for a mere 10,000 years. There are millions upon millions of species yet to be identified. Indeed, insects are perhaps nature's least celebrated but most successful creatures on earth. By following the footsteps of several bug scientists, we take a closer look at the extraordinary bugs that crawl, swim, and whiz past us. We visit the morgue, drop by an outdoor classroom, witness a bug bowl festival--complete with a cricket-spitting contest (yuck!)--and travel to the rain forests of Costa Rica--all in pursuit of a better understanding of bugs, glorious bugs.
Also in This Series

Note! Citation formats are based on standards as of July 2010. Citations contain only title, author, edition, publisher, and year published. Citations should be used as a guideline and should be double checked for accuracy.
Staff View
Grouped Work ID:
49133bb9-258a-a013-48df-68173836a777
Go To GroupedWorkView in Staff Client