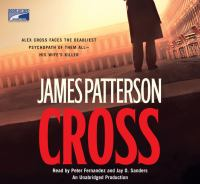 Description
Among the villains Alex Cross has faced-Gary Soneji, Casanova, Kyle Craig, the Wolf-one psychopath tops them all. Alex knows him as his wife's killer.

#1 bestselling author James Patterson returns with the pinnacle of all Alex Cross thrillers. Alex Cross was a rising star in the Washington, DC, police department when an unknown shooter gunned down his wife, Maria, in front of him. Alex's need for vengeance was placed on hold as he faced another huge challenge-raising his children without their mother.

Years later, Alex has left the FBI and set up practice as a psychologist once again. His life with his family finally feels like it's in order when Cross's former partner John Sampson calls in a favor. The case triggers a connection to Maria's death, and Alex may have a chance to catch his wife's murderer after all these years. Will justice be served at long last? Or is this the culminating scene in his own deadly obsession?

From the man USA Today has called the "master of the genre," CROSS is the high-velocity thriller James Patterson's and Alex Cross's fans have waited years to hear.

Note! Citation formats are based on standards as of July 2010. Citations contain only title, author, edition, publisher, and year published. Citations should be used as a guideline and should be double checked for accuracy.
Staff View
Grouped Work ID:
6b3b72b9-b202-6020-10d3-e6d9245a5ecf
Go To GroupedWorkView in Staff Client