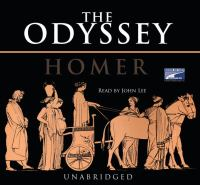 Description
In this classic epic chronicle of the Greek Hero on his travels home from the Trojan War, Odysseus survives storm and shipwreck, the cave of the Cyclops, and the isle of Circe. He withstands the lure of the Sirens' song and a trip to the Underworld, only to find his most difficult challenge at home, where treacherous suitors seek to steal his kingdom and his loyal wife, Penelope.

Favorite of the gods, Odysseus embodies the energy, intellect, and resourcefulness that were of highest value to the ancients and that remain ideals to this day.

In this audiobook recording, translated by Samuel Butler, realize again the power and beauty of the original Greek verse, which demonstrates why the epic tale of THE ODYSSEY inspired such writers as Virgil and James Joyce, and captured the human imagination for nearly three thousand years.

General Note
Unabridged.
Participants/Performers
Read by John Lee.
Description
A reprint of the ancient Greek epic with an introduction giving the background to the times, viz. "The ceremonies of civilization do not mean much to us today; we tend to see them as insincere ... To Homer they are very beautiful and their violation a more serious matter than we can imagine."
System Details
Compact discs.
Similar Series From NoveList
Similar Titles From NoveList
Similar Authors From NoveList
Borrower Reviews
Editorial Reviews
Published Reviews
Reviews from GoodReads
Loading GoodReads Reviews.
Citations
APA Citation (style guide)

Note! Citation formats are based on standards as of July 2010. Citations contain only title, author, edition, publisher, and year published. Citations should be used as a guideline and should be double checked for accuracy.
Staff View
Grouped Work ID:
8b012f08-a3dc-7252-20ed-324a33639a3e
Go To GroupedWorkView in Staff Client