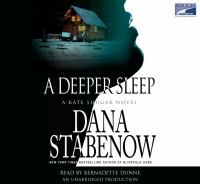 Description
In A DEEPER SLEEP, her first novel since Blindfold Game , the stand-alone political thriller that made Dana Stabenow a New York Times bestseller, the author returns to the popular and award-winning Kate Shugak series.Kate, a private investigator, has been working on a case for the Anchorage District Attorney involving the murder of a young woman by her husband, a man named Louis Deem. Deem has been the subject of investigation before, and he's never been convicted of a crime. But Kate and her on-again, off-again lover, state trooper Jim Chopin, who arrested Deem, are convinced that this time it's different, and he'll finally be punished for his actions. When the jury returns a verdict of not guilty, Kate and Jim are devastated, and like the rest of the citizens of Niniltna, Alaska, certain that a man has gotten away with murder. They can't help but think that it's only a matter of time before he's in the frame for another killing. Sure enough, a few weeks later a shooting leaves two dead in an apparent robbery. But this time Kate and Jim have a witness, and they're not going to let Louis Deem get away again. Or will he?Dana Stabenow, Edgar Award(R)-winning author and New York Times bestselling thriller writer, delivers a gripping nail-biter about one town's search for justice----at any cost.
Also in This Series

Note! Citation formats are based on standards as of July 2010. Citations contain only title, author, edition, publisher, and year published. Citations should be used as a guideline and should be double checked for accuracy.
Staff View
Grouped Work ID:
fd76bf02-06d4-f3a3-a398-2945a64f8e54
Go To GroupedWorkView in Staff Client