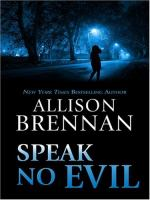 Description
Silence is deadly. The murder of eighteen-year-old Angie Vance was exceptionally vile-her mouth was sealed with glue, an obscenity scrawledwas across her skin, and she was suffocated in a garbage bag. The killing seems personal, so police detective Carina Kincaid focuses her efforts on the victim's much older ex-boyfriend, Steve Thomas. But without physical evidence, Carina can't make a collar or a case. She also can't stop Sheriff Nick Thomas, the prime suspect's brother, from conducting his own unwelcome investigation.

Though Nick is still scarred and unsteady from a recent confrontation with a serial killer, he's determined to prove his brother's innocence. But his confidence is shaken when he learns of Steve's dark side, and when a friend of the murdered girl meets a similarly gruesome fate. With no time to lose, Carina and Nick work together to trap a psychopath, before another unlucky woman faces an unspeakable end.

Evil has spoken. Now see what it can do.

Note! Citation formats are based on standards as of July 2010. Citations contain only title, author, edition, publisher, and year published. Citations should be used as a guideline and should be double checked for accuracy.
Staff View
Grouped Work ID:
7dde9edd-479b-5628-fca8-a33646d72f2c
Go To GroupedWorkView in Staff Client