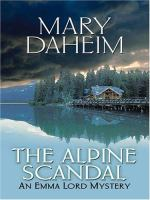 Description
Welcome to mystery lovers' favorite destination: Alpine, Washington, Mary Daheim' s picturesque old logging town in the foothills of the Cascade Mountains. From the Venison Inn to the Upper Crust Bakery, Front Street is jumping- and the nerve center of the community is the office of The Alpine Advocate, Emma Lord' s weekly newspaper, which keeps folks up to speed on everything from joyous weddings to sudden, violent death. THE ALPINE SCANDAL It' s a quiet morning at the Advocate until the mail brings shocking news: a formal obituary for Alpiner Elmer Nystrom. As far as anyone knows, Elmer is alive and well. But he hasn' t turned up for work, so Emma and her unstoppable House & Home editor, Vida Runkel, rush to the Nystrom home, where they find Elmer' s lifeless body in the henhouse, half buried under straw. Not only has he been murdered, but his obituary had been mailed before he died. Though Elmer was well liked by everyone, the same cannot be said of his standoffish wife or his son, the town' s new orthodontist. Rumors fly- straight into the office of the Advocate. Why did Dr. Nystrom' s new receptionist resign at the end of her first day? Why are the Nystroms' neighbors so close-mouthed? Who mailed that prophetic obituary? With Sheriff Milo Dodge in the hospital, it' s up to Emma and Vida to get to the bottom of the tragedy. Alpiners love scandal, and with Elmer' s murder, they' ll get their fill. The Alpine Scandal, number nineteen in this bestselling series, is as suspenseful and charming as its predecessors, a delicious look into the life of a small town where all inhabitantsknow one another- just not as well as they thought.
Also in This Series

Note! Citation formats are based on standards as of July 2010. Citations contain only title, author, edition, publisher, and year published. Citations should be used as a guideline and should be double checked for accuracy.
Staff View
Grouped Work ID:
54b2e0a0-2e81-81d7-9936-5eab3fe06ae1
Go To GroupedWorkView in Staff Client