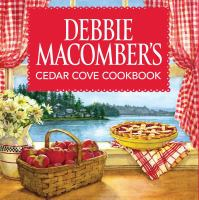 Description
Now, from Debbie Macomber's Cedar Cove Cookbook, you can relish in your own home the same superb meals found in Cedar Cove's households. Charlotte Rhodes, one of the series' most beloved characters, invites all fans of Cedar Cove, as well as anyone who enjoys classic home cooking, to join her in touring the town's kitchens as she shares more than 130 of her treasured family recipes. (And she's got plenty to tell you about the people of Cedar Cove, too!) You'll find such mouthwatering dishes as: · Justine Gunderson's Grilled Salmon with Lime-Jalapeño Butter · Teri Polger's Macaroni and Cheese · Charlotte Rhodes's Cinnamon Rolls · Olivia Griffin's Creamy Tarragon Chicken Salad · The Pot Belly Deli's Broccoli and Cheese Soup in a Bread Bowl · And many more Whether you've just discovered the world of Cedar Cove or have devoured all the books, you can now partake of the town's culinary traditions and cook just like Charlotte, her family and friends!
Also in This Series

Note! Citation formats are based on standards as of July 2010. Citations contain only title, author, edition, publisher, and year published. Citations should be used as a guideline and should be double checked for accuracy.
Staff View
Grouped Work ID:
16e2725b-d412-eca3-01d2-c38f5ac4d8ed
Go To GroupedWorkView in Staff Client