Select library locations are open for curbside service and public computer reservations only. Get details here. 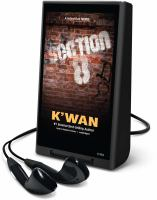 General Note
Title from Playaway label.
General Note
"A Hood Rat novel"--Container.
General Note
Release date supplied by publisher.
General Note
Previously released by Blackstone Audio, Inc., p2009.
General Note
Issued on Playaway, a dedicated audio media player.
General Note
In container (21 x 13 x 3 cm.)
General Note
One set of earphones and one AAA battery required for playback.
Participants/Performers
Read by Napiera Groves.
Description
Tionna's on-and-off addicted mother has always taught her to get hers by any means necessary. Tionna's heart is cold, but she holds a warm place in it for Duhan, the father of her two sons and her on-again-off-again boyfriend since they were teenagers. Duhan becomes her knight in shining armor until the government turns their dream into a nightmare. With Duhan behind bars and everything she loves seized, she finds herself starting over in the same neighborhood that she swore she'd never return to. With two kids, a man in prison, and no back-up plan, Tionna is once again living by her wits in order to maintain the lifestyle she's become so accustomed to. Back in the thick of things with her best friends, Gucci, Boots and Tracy, she finds herself rediscovering her old life and suddenly begins to wonder if she's really cut out to be a prisoner's wife.
Similar Series From NoveList
Similar Titles From NoveList
Similar Authors From NoveList
Borrower Reviews
Published Reviews
Reviews from GoodReads
Loading GoodReads Reviews.
Citations
APA Citation (style guide)

Note! Citation formats are based on standards as of July 2010. Citations contain only title, author, edition, publisher, and year published. Citations should be used as a guideline and should be double checked for accuracy.
Staff View
Loading Staff View.
Powered By Aspen Discovery supported by ByWater Solutions
v. 21.03.00
CONNECT WITH US