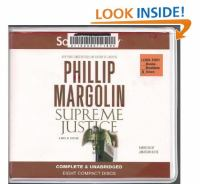 "New York Times" bestselling author Phillip Margolin returns to the corridors of power in Washington, DC, with an exciting thriller about a ghost ship and the president s nominee to the Supreme Court.

Sarah Woodruff, on death row in Oregon for murdering her lover, John Finley, has appealed her case to the Supreme Court just when a prominent justice resigns, leaving a vacancy.

Then, for no apparent reason, another justice is mysteriously attacked. Dana Cutler, one of the heroes from Margolin s bestselling "Executive Privilege," is quietly called in to investigate. She looks for links between the Woodruff appeal and the ominous incidents in the justices chambers, which eventually lead her to a shoot-out that took place years ago on a small freighter docked upriver in Shelby, Oregon, containing a dead crew and illegal drugs. The only survivor on board? "John Finley."

With the help of Brad Miller and Keith Evans, Dana uncovers a plot by a rogue element in the American intelligence community involving the president s nominee to the Supreme Court, and soon the trio is thrown back into the grips of a deadly, executive danger.

With nonstop action, "Supreme Justice" picks up where "Executive Privilege" left off, putting listeners right back where they were, on the edge of their seats."

Note! Citation formats are based on standards as of July 2010. Citations contain only title, author, edition, publisher, and year published. Citations should be used as a guideline and should be double checked for accuracy.
Staff View
Grouped Work ID:
3ae8679e-a038-b371-8524-acbd6f8854e3
Go To GroupedWorkView in Staff Client