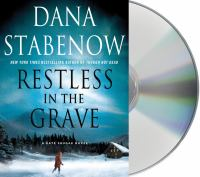 New York Times bestseller Dana Stabenow returns with her most outstanding novel yet, teaming up two of her most beloved characters, Aleut private investigator Kate Shugak and Alaska state trooper Liam Campbell, in the same story for the first time.   Alaska aviation entrepreneur Finn Grant died in the fiery crash of his Piper Super Cub. Someone sabotaged his engine, and virtually everyone in southwestern Alaska has a motive, including his betrayed wife, his bullied children, and Liam's wife, bush pilot Wyanet Chouinard. With few places to turn, Liam asks his former mentor Niniltna post commander Sergeant Jim Chopin, for help, and Jim quickly brings Kate onto the case.   Working undercover as-of all things-a waitress at Bill's Bar and Grill, Kate learns over beer and burgers that Grant's business had expanded meteorically over the last two years. After buying the closed Air Force base south of town from the federal government at a bargain-basement price, he became a fixed-base operator running his fishing, hunting, and flight-seeing business, servicing planes flying through the area, and most interestingly and lucratively, getting into the air freight business. But what kind of freight was he moving, and where?   The answers involve Kate in her most challenging case to date, one that starts with murder and quickly sprawls into a much larger conspiracy ranging from the darkest family secrets to treason and beyond. Restless in the Grave is a treat for fans and another outstanding addition to Dana Stabenow's acclaimed and award-winning series.
Also in This Series

General Note
Unabridged.
General Note
Compact disc.
General Note
Duration: 11:00:00.
General Note
"Includes a bonus interview with the author"--container.
Participants/Performers
Read by Marguerite Gavin.
Description
Aleut private investigator Kate Shugak and Alaska State Trooper Liam Campbell team up for the first time ever when Liam needs Kate's help to clear his wife of the murder of a wealthy aviation entrepreneur. In their most challenging case to date, Kate goes undercover to find that the murder was only the beginning of a much larger conspiracy ranging from the darkest family secrets to treason and beyond.
Similar Series From NoveList
Similar Titles From NoveList
Similar Authors From NoveList
Borrower Reviews
Editorial Reviews
Published Reviews
Reviews from GoodReads
Loading GoodReads Reviews.
Citations
APA Citation (style guide)

Note! Citation formats are based on standards as of July 2010. Citations contain only title, author, edition, publisher, and year published. Citations should be used as a guideline and should be double checked for accuracy.
Staff View
Grouped Work ID:
aecb2389-fb8a-812b-ed5d-358479aebb1c
Go To GroupedWorkView in Staff Client