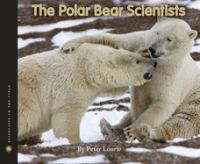 Description
Follow scientists as they scan the Alaskan wilderness for these magnificent creatures. It is springtime on the North Slope of Alaska, and the U.S. Geological Survey team--the polar bear biologists Kristin Simac and Mike Lockhart--is gearing up for polar bear capturing. During a capture, all information is collected on the sea ice. The scientists locate bears from a helicopter, tranquilize them, give them tattoo ID numbers and tags, and collect data such as height, weight, and body fat measurements and samples such as blood, hair, feces, and even teeth. All this information goes into a large database studied by scientists such as Drs. Steven Amstrup and George Durner, the former and current leaders of the Polar Bear Research Project. For more than forty-five years, scientists have been capturing bears in order to get information. What has this information been telling scientists about polar bears and global warming?
Also in This Series

Bibliography
Includes bibliographical references (p. 78) and index.
Description
"In the world there are probably fewer than 30 people who spend all or most of their effort working with polar bears. A veteran polar bear biologist, and the man in charge of Alaskan polar bear research for the past thirty years, Dr. Steven Amstrup has worked full time on polar bears since he joined the Polar Bear Project in 1980. The Polar Bear Project conducts ongoing research on polar bear populations and habitats in the Southern Beaufort Sea in Barrow, Alaska. Now under the leadership of George Durner, the Project has collected four decades of detailed, valuable data about how polar bears are responding to sea ice changes in the Arctic. This information has helped raised awareness about polar bears and their plight, and the same data may one day help scientists make new decisions for polar bear survival. Amstrup and Durner now spend most of their time 725 miles south of Barrow, Alaska at the University of Alaska, Anchorage campus, conducting research and drawing conclusions based on the discoveries that their team makes. Those scientists include polar bear biologists Kristin Simac and Mike Lockhart, based at times out of the abandoned Navy Arctic Research Laboratory in Barrow. Every spring scientists like Kristin and Mike go out for six to eight weeks to capture bears on the Southern Beaufort Sea. By capture one means "tranquilize, take samples and measurements, tag, and release" -- The Polar Bear Scientists begins on the first day of capture season and follows Kristin, Mike, and their helicopter mechanic as they fly through the skies over Barrow, looking for polar bears, and finding more water and less ice than they've seen in the past. The process of capturing polar bears is an exciting and challenging one. The polar bears have to be properly tranquilized in a safe area -- so just because the team spots a polar bear, doesn't mean they automatically try to capture it. Tranquilizing a bear too close to water or thin ice might mean the polar bear could stumble in and drown. It's also a challenge to tranq a mom bear and her babies, but when the opportunity presents itself, the team does its best to get the job done. Once they are on the ground with a captured bear, the research begins. All sorts of information and measurements are taken, blood is drawn, tags are affixed. What does it all mean? Are the polar bears getting smaller and moving further to find food every year? Is there more water and less ice than there was before? What can be done?"-- Provided by publisher.
Target Audience
8.3.
Target Audience
3-6,Follett School Solutions.
Target Audience
NC1260,Lexile.
Study Program Information
Accelerated Reader AR,MG,8.3,4.0,148272.,4O563
Similar Series From NoveList
Similar Titles From NoveList
Similar Authors From NoveList
Borrower Reviews
Editorial Reviews
Published Reviews
Reviews from GoodReads
Loading GoodReads Reviews.
Citations
APA Citation (style guide)

Note! Citation formats are based on standards as of July 2010. Citations contain only title, author, edition, publisher, and year published. Citations should be used as a guideline and should be double checked for accuracy.
Staff View
Grouped Work ID:
62f677b1-3bdc-80b9-0c50-12dd12773b1f
Go To GroupedWorkView in Staff Client