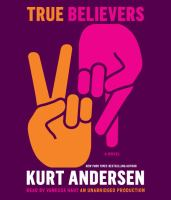 Description
NAMED ONE OF THE BEST BOOKS OF THE YEAR BY The Washington Post * San Francisco Chronicle In True Believers, Kurt Andersen--the New York Times bestselling and critically acclaimed author of Heyday and Turn of the Century --delivers his most powerful and moving novel yet. Dazzling in its wit and effervescent insight, this kaleidoscopic tour de force of cultural observation and seductive storytelling alternates between the present and the 1960s--and indelibly captures the enduring impact of that time on the ways we live now. Karen Hollander is a celebrated attorney who recently removed herself from consideration for appointment to the U.S. Supreme Court. Her reasons have their roots in 1968--an episode she's managed to keep secret for more than forty years. Now, with the imminent publication of her memoir, she's about to let the world in on that shocking secret--as soon as she can track down the answers to a few crucial last questions. As junior-high-school kids back in the early sixties, Karen and her two best friends, Chuck and Alex, roamed suburban Chicago on their bikes looking for intrigue and excitement. Inspired by the exotic romance of Ian Fleming's James Bond novels, they acted out elaborate spy missions pitting themselves against imaginary Cold War villains. As friendship carries them through childhood and on to college--in a polarized late-sixties America riven by war and race as well as sex, drugs, and rock and roll--the bad guys cease to be the creatures of make-believe. Caught up in the fervor of that extraordinary and uncanny time, they find themselves swept into a dangerous new game with the highest possible stakes. Today, only a handful of people are left who know what happened. As Karen reconstructs the past and reconciles the girl she was then with the woman she is now, finally sharing pieces of her secret past with her national-security-cowboy boyfriend and activist granddaughter, the power of memory and history and luck become clear. A resonant coming-of-age story and a thrilling political mystery, True Believers is Kurt Andersen's most ambitious novel to date, introducing a brilliant, funny, and irresistible new heroine to contemporary fiction. Look for special features inside. Join the Random House Reader's Circle for author chats and more. Praise for True Believers   "Funny, fiendishly smart."-- San Francisco Chronicle   "A great American novel."-- Vanity Fair   "A big, swinging novel . . . [a] colorful story . . . This could be the most rambunctious meeting your book club will have for a long time." --The Washington Post   "Intelligent and insightful . . . Think The Heart Is a Lonely Hunter and Atonement, a '60s-era female Holden Caulfield. . . . Andersen is an agile storyteller. . . . [There are] witty, occasionally even profound observations about the '60s and today." --USA Today   "So epic: Part thriller, part coming-of-age tale, the novel alternates between the present and the 1960s, capturing some of America's most pivotal moments in history like a time capsule." --Marie Claire   "This is an ambitious and remarkable novel, wonderfully voiced, about memory, secrets, guilt, and the dangers of certitude. Moreover, it asks essential questions about what it means to be an American and, in a sense, what it means to be America."-- Booklist (starred review)   "Fascinating and wisely observant." --O: The Oprah Magazine
Also in This Series

General Note
Unabridged.
General Note
Compact discs.
General Note
Duration: 18:30:00.
Participants/Performers
Read by Vanessa Hart.
Description
Karen Hollander removed herself from consideration for appointment to the Supreme Court. Her reasons have their roots in 1968, a secret she's kept for 40 years. Now, with the upcoming publication of her memoir, she's about to reveal that shocking secret. First she must reconstruct the past and reconcile the girl she was then with the woman she is now.
Similar Series From NoveList
Similar Titles From NoveList
Similar Authors From NoveList
Borrower Reviews
Editorial Reviews
Published Reviews
Reviews from GoodReads
Loading GoodReads Reviews.
Citations
APA Citation (style guide)

Note! Citation formats are based on standards as of July 2010. Citations contain only title, author, edition, publisher, and year published. Citations should be used as a guideline and should be double checked for accuracy.
Staff View
Grouped Work ID:
3d4176e4-fd41-b73d-8a31-9307e3cfafa6
Go To GroupedWorkView in Staff Client