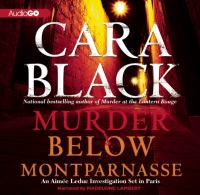 Description
A long-lost Modigliani portrait, a grieving brother's blood vendetta, a Soviet secret that's been buried for eighty years--Parisian private investigator Aimee Leduc's current case is her most exciting one yet.When Aimee's long-term partner and best friend Rene leaves their detective agency for a new job in Silicon Valley, Aimee knows she can handle the extra workload. At least, that what she tells herself ... repeatedly.But all bets are off when Yuri Volodya, a mysterious old Russian man, hires Aimee to protect a painting. By the time she gets to his Montparnasse atelier, the precious painting has already been stolen, leaving Aimee smelling a rat. The next day, Yuri is found tortured to death in his kitchen. To top it all off, it looks like Aimee isn't the only one looking for the painting. Some very dangerous people are threatening her and her coworkers, and witnesses are dropping like flies. Now Aimee has to find the painting, stop her attackers, and figure out what her long-missing mother, who is on Interpol's most wanted list, has to do with all this--fingers crossed she wasn't Yuri's murderer, despite clues pointing in that direction.Obviously, Rene doesn't need to worry. Aimee has things under control.
Also in This Series

General Note
Title from container.
General Note
Compact disc.
General Note
Duration: 9:59:00.
General Note
"Sound Library"--Container.
General Note
In container (17 cm.)
Participants/Performers
Read by Madeleine Lambert.
Description
Private investigator Aimee Leduc is left solo when her partner and best friend Rene leaves their company for Silicon Valley. Problems are made worse when she happens upon two complicated cases: a government case against an intelligence hacker, and what seems to be an art heist gone bad. When the cases give some dangerous people the impression that Aimee knows too much, she must solve the mystery of who committed the crimes before danger catches up to her.
Similar Series From NoveList
Similar Titles From NoveList
Similar Authors From NoveList
Borrower Reviews
Editorial Reviews
Published Reviews
Reviews from GoodReads
Loading GoodReads Reviews.
Citations
APA Citation (style guide)

Note! Citation formats are based on standards as of July 2010. Citations contain only title, author, edition, publisher, and year published. Citations should be used as a guideline and should be double checked for accuracy.
Staff View
Grouped Work ID:
8a154d9f-7729-f67b-8432-baac7b98b5e5
Go To GroupedWorkView in Staff Client