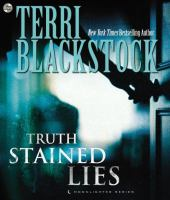 Truth-Stained Lies is the thrilling first entry in the Moonlighters series by Terri Blackstock, bestselling author of acclaimed series including Intervention and the Restoration Series.

Cathy Cramer is a former lawyer and investigative blogger who writes commentary on local homicides. When she finds a threatening note warning her that sheâe(tm)s about to experience the same kind of judgment and speculation that she dishes out in her blog, Cathy writes it off as mischief âe¦ until her brother is caught in the middle of a murder investigationâe"the victim is his ex-wife. As her brother is tried and convicted in the media, and bloggers and commentators like her have a field day, Cathy wonders if she should have taken the threat more seriously.

Cathy and her two sisters, Holly and Juliet, moonlight as part-time private investigators, working to clear their brotherâe(tm)s name. But can they save their brother and stop the killer before he strikes again?

Note! Citation formats are based on standards as of July 2010. Citations contain only title, author, edition, publisher, and year published. Citations should be used as a guideline and should be double checked for accuracy.
Staff View
Grouped Work ID:
eccca1bc-66cf-7161-cf0b-444ef288b87f
Go To GroupedWorkView in Staff Client