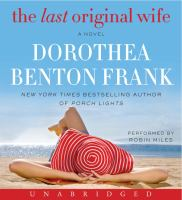 Leslie Anne Greene Carter is The Last Original Wife among her husband Wesley's wildly successful,Atlanta social set. His cronies have all traded in the mothers of their children they promised to loveand cherish--'til death did them part--for tanned and toned young Barbie brides.

If losing the social life and close friends she adored wasn't painful enough, a series of setbacksshake Les's world and push her to the edge. She's had enough of playing the good wife to a husbandwho thinks he's doing her a favor keeping her around. Now, she's going to take some time forherself--in the familiar comforts and stunning beauty of Charleston, her beloved hometown. Inher brother's stately historic home, she's going to reclaim the carefree girl who spent lazy summerssharing steamy kisses with her first love on Sullivans Island. Daring to listen to her inner voice, shewill realize what she wants . . . and find the life of which she's always dreamed.

Told in the alternating voices of Les and Wes, The Last Original Wife is classic Dorothea BentonFrank: an intoxicating tale of family, friendship, self-discovery, and love, that is as salty as aLowcountry breeze and as invigorating as a dip in Carolina waters on a sizzling summer day.

Note! Citation formats are based on standards as of July 2010. Citations contain only title, author, edition, publisher, and year published. Citations should be used as a guideline and should be double checked for accuracy.
Staff View
Grouped Work ID:
043f3f4f-84a7-68ec-5fff-6f3e98b4fbd1
Go To GroupedWorkView in Staff Client