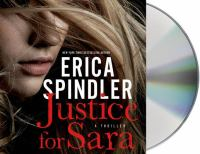 Description
Bestselling author Erica Spindler returns with a chilling new suspense novel about a woman who returns home ten years after her sister's murder to find the true killer When seventeen-year-old Katherine McCall&nbspawakened one morning to find her beloved sister,&nbspSara, brutally murdered, her whole life changed in the blink of an eye.&nbspKat was named the prime suspect and,&nbspon a string of circumstantial evidence, charged and tried. While the jury found her innocent, not everyone else agreed, and her only choice was to go into hiding. But she carried a dark secret with her, one that made her worry she might actually have had something to do with Sara's death . . . Now, years&nbsplater,&nbspKat is still haunted by her sister's unsolved murder and continues to receive chilling anonymous letters,&nbspbut she has tried to move on with her life. Until, on the tenth anniversary of Sara's death, she receives a letter that makes the past impossible to ignore: "What about justice for Sara?" What  about justice for Sara?&nbspAnd for herself? Kat realizes that going back to Liberty, Louisiana, might be the only&nbspway to move forward and find some peace. And there's a killer out there who was never caught. But the town she's come back to is hardly different from the one she left. The secrets and suspicions still run deep. Kat has an ally in Detective Luke Tanner, son of the former Liberty police chief, but he may be her only one. With plenty of enemies, no one to trust and a killer determined to keep&nbspa dark secret buried, Kat must decide if justice is worth fighting-and dying-for.
Also in This Series

General Note
Duration: 10:00:00.
General Note
"A Macmillan audiobook from St. Martin's Press."
General Note
Compact discs.
Participants/Performers
Read by Tavia Gilbert.
Description
"When rebellious seventeen-year-old Katherine McCall awakened one morning to find her beloved sister, Sara, viciously murdered, her whole life changed in the blink of an eye. Kat was named the prime suspect, charged and tried--and found innocent. But not everyone agreed with the verdict, and Kat's only choice was to go into hiding. ... On the tenth anniversary of Sara's death, Kat receives an anonymous letter that makes the past impossible to ignore: "What about justice for Sara?" When Kat returns to her home town in Louisiana to investigate the days surrounding her sister's death she begins to learn that the cost of justice may be too high"--Container.
Similar Series From NoveList
Similar Titles From NoveList
Similar Authors From NoveList
Borrower Reviews
Editorial Reviews
Published Reviews
Reviews from GoodReads
Loading GoodReads Reviews.
Citations
APA Citation (style guide)

Note! Citation formats are based on standards as of July 2010. Citations contain only title, author, edition, publisher, and year published. Citations should be used as a guideline and should be double checked for accuracy.
Staff View
Grouped Work ID:
f2195996-624e-ad96-8553-db6a73bea533
Go To GroupedWorkView in Staff Client