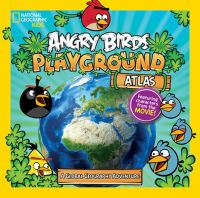 Follow along with your favourite Angry Birds character as they fly around the world discovering continents, countries, and cultures. Kids will be hooked on a wacky search for the Angry Birds' eggs as they seek out clues that lead them to amazing discoveries.

It's time to pack your bags and join the fun as the angry birds learn all about the world! It starts when a mysterious book washes up on the shores of Piggy Island. It's full of colourful maps and wonderful pictures of far-off places, people and animals. What in the world could it be? An atlas! As the gang dives in, they imagine what it would be like to wing by the Statue of Liberty , zigzag over there Golden Gobi desert, chill out with the penguins, and chirp in new languages. The atlas guides you through cultures, languages, countries, and cities while the birds keep you laughing the whole way.

Note! Citation formats are based on standards as of July 2010. Citations contain only title, author, edition, publisher, and year published. Citations should be used as a guideline and should be double checked for accuracy.
Staff View
Grouped Work ID:
2097b908-0e0a-e0ab-4498-b3e83357b311
Go To GroupedWorkView in Staff Client