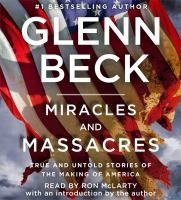 Description
History as it's supposed to be told: true and thrilling.

History is about so much more than memorizing facts. It is, as more than half of the word suggests, about the story. And, told in the right way, it is the greatest one ever written: Good and evil, triumph and tragedy, despicable acts of barbarism and courageous acts of heroism.

The things you've never learned about our past will shock you. The reason why gun control is so important to government elites can be found in a story about Athens that no one dares teach. Not the city in ancient Greece, but the one in 1946 Tennessee. The power of an individual who trusts his gut can be found in the story of the man who stopped the twentieth hijacker from being part of 9/11. And a lesson on what happens when an all-powerful president is in need of positive headlines is revealed in a story about eight saboteurs who invaded America during World War II.

Miracles and Massacres is history as you've never heard it told. It's incredible events that you never knew existed. And it's stories so important and relevant to today that you won't have to ask, Why didn't they teach me this? You will instantly know. If the truth shall set you free, then your freedom begins on page one of this book. By the end, your understanding of the lies and half-truths you've been taught may change, but your perception of who we are as Americans and where our country is headed definitely will.

General Note
Compact disc.
General Note
Duration: ca. 10:00:00.
Participants/Performers
Read by Ron McLarty with an introduction by the author.
Description
History is about so much more than memorizing facts. It is, as more than half the word suggests, about the story. And, told in the right way, it is the greatest one ever written: Good and evil, triumph and tragedy, despicable acts of barbarism, and courageous acts of heroism. This is history as it's never been told before, stories so important and relevant that the listener will instantly know why they weren't taught them before.
Similar Series From NoveList
Similar Titles From NoveList
Similar Authors From NoveList
Borrower Reviews
Editorial Reviews
Published Reviews
Reviews from GoodReads
Loading GoodReads Reviews.
Citations
APA Citation (style guide)

Note! Citation formats are based on standards as of July 2010. Citations contain only title, author, edition, publisher, and year published. Citations should be used as a guideline and should be double checked for accuracy.
Staff View
Grouped Work ID:
595cb637-dc78-ec60-43b6-4c60560b0ca2
Go To GroupedWorkView in Staff Client