East, North, and Hadley Park Branch Libraries are closed through October 2 for repairs. 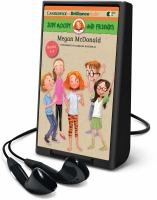 General Note
One set of earphones and one AAA battery required for playback.
General Note
Title from Playaway label.
General Note
Previously released by Brilliance Audio.
General Note
Issued on Playaway, a dedicated audio media player.
Participants/Performers
Performed by Barbara Rosenblat.
Description
Jessica Finch in Pig trouble: Jessica Finch loves pigs, pigs, pigs. With her birthday coming up, Jessica hopes her present will be a real-live potbellied pig. Jessica can hardly wait for her party, but Judy Moody is acting like a pighead, so Jessica un-invites her. To make matters worse, Jessica has snooped around and found zero sign of a pig present. Will her birthday be a disaster?; Rocky Zang in The amazing Mr. Magic: Rocky is perfecting his magic tricks for his show, when Judy Moody offers to be his assistant. Rocky agrees, but it turns out that Judy is the most un-spectacular assistant ever. Is Rocky's magic good enough to mend his and Judy's friendship? ; Amy Namey in Ace reporter: Amy Namey is on the hunt for a big story in a town where not much happens. What's a budding reporter to do? For one thing she can get the advice of her mom, and for another, she can enlist the help of Judy Moody. With Judy along to sniff out a story, anything can happen.; Frank Pearl in The awful waffle kerfuffle: Just once, Frank Pearl would like to win at something! Could an amazing yo-yo trick or Cookie the parrot land him a prize? Or maybe Frank will be crowned top chef at the breakfast bash? With three shots at a prize and Judy Moody cheering him on (sort of), there's no way Frank can miss out on a trophy.
Target Audience
Ages 5+