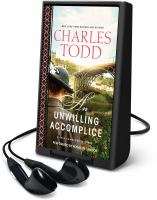 General Note
One set of earphones and one AAA battery required for listening.
General Note
Title from Playaway label.
General Note
"HD."
General Note
"LIGHT."
General Note
Release date supplied by publisher.
General Note
Previously released by HarperCollins.
General Note
Issued on Playaway, a dedicated audio media player.
Participants/Performers
Performed by Rosalyn Landor.
Description
World War I Battlefield nurse Bess Crawford's career is in jeopardy when a murder is committed on her watch. Home on leave, Bess Crawford is asked to accompany a wounded soldier confined to a wheelchair to Buckingham Palace, where he's to be decorated by the King. The next morning when Bess goes to collect Wilkins, he has vanished. Both the Army and the nursing service hold Bess negligent for losing the war hero, and there will be an inquiry. Then comes disturbing word from the Shropshire police, complicating the already difficult situation: Wilkins has been spotted, and he's killed a man. If Bess is to save her own reputation, she must find Wilkins and uncover the truth. But the elusive soldier has disappeared again and even the Shropshire police have lost him. Suddenly, the moral implications of what has happened--that a patient in her charge has committed murder--become more important to Bess than her own future. She's going to solve this mysterious puzzle, but righting an injustice and saving her honor may just cost Bess her life.
Similar Series From NoveList
Similar Titles From NoveList
Similar Authors From NoveList
Borrower Reviews
Published Reviews
Reviews from GoodReads
Loading GoodReads Reviews.
Citations
APA Citation (style guide)