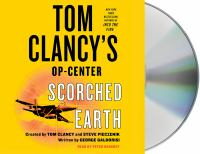 In this gripping thriller from the New York Times bestselling author of Out of the Ashes , an Islamic extremist is on a quest for vengeance after his only son is killed and it's up to Op-Center to stop his lethal plot.

General Bob Underwood--a special presidential envoy for the Global Coalition to Counter ISIL--is en route to the Syrian city of al-Bukamal when a rocket-propelled grenade strikes the side of his Humvee and the heavily armored convoy comes under attack. The general's bodyguard is brutally murdered, and Underwood himself is kidnapped. Hours later, the President and top officials watch in horror from the Oval Office, as the general is viciously beheaded by an ISIL leader--broadcast on live television through a direct feed from Al Jazeera.

The world is stunned by the bloody scene, but even more so that this supposedly loose-knit terrorist organization was able to orchestrate a lethal attack on the world's most powerful military. American forces goes into high gear on land and sea to retaliate, but when the ISIS leader's son is killed in an American bombing raid, his rage knows no bounds and he determines to wreak vengeance on the American homeland itself.

With everything in the balance, Op-Center must assemble both its domestic strike force, as well as its international intervention force--built around a seasoned squad operating out of the secretive unit that captured Osama bin Laden--to stay one step ahead of a ruthless enemy.

General Note
Title from web page.
General Note
Compact discs.
Participants/Performers
Read by Peter Berkrot.
Description
"ISIS reigns supreme in huge swathes of Iraq and Syria and poses a threat to stability in the Middle East. When an American airstrike kills the ISIS leader's only son, he vows revenge. He discovers that a U.S. Navy admiral, now on duty in the Pentagon, led the strike. The ISIS leader has him kidnapped by American home-grown ISIS sympathizers. Their orders: smuggle him out of the United States and bring him to Mosul for execution. When the normal levers of U.S. domestic security can't move quickly enough to locate the hostage, the President calls on the National Crisis Management Center-Op-Center to find the admiral and rescue him. But as the crisis drags on and it appears the admiral is hidden in a cargo shipment, already on a flight out of the country en route to Mosul, his son, a Navy SEAL, embarks on a lone-wolf mission to rescue his father. Op-Center must muster both its domestic strike force, an elite component of the FBI's Critical Incident Response Group Hostage Rescue Team, as well as its international intervention force built around a seasoned squad operating out of the secretive unit that captured Osama bin Laden: the Joint Special Operations Command. As in previous crises, Op-Center's group of twenty- and thirty-something operatives, its "Geek Tank," uses data collation programs, anticipatory intelligence algorithms, and outright hacking to stay one step ahead of a ruthless enemy"--,Provided by publisher.
Similar Series From NoveList
Similar Titles From NoveList
Similar Authors From NoveList
Borrower Reviews
Editorial Reviews
Published Reviews
Reviews from GoodReads
Loading GoodReads Reviews.
Citations
APA Citation (style guide)

Note! Citation formats are based on standards as of July 2010. Citations contain only title, author, edition, publisher, and year published. Citations should be used as a guideline and should be double checked for accuracy.
Staff View
Grouped Work ID:
8639d00f-b09d-3335-3db6-6c4379b41c54
Go To GroupedWorkView in Staff Client