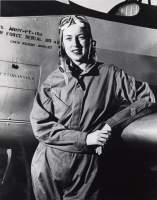 Organization & arrangement of materials
Organized into four series: I. Cornelia Fort; II. Fort Family; III. Photographs; IV. Research.
Organization & arrangement of materials
Arrangement: Mostly chronological.
General Note
Finding aids dated prior to October 2013 are obsolete. Many significant changes in the organization and arrangement of this collection took place in 2012. Collection was first processed in 2006.
General Note
Materials housed in the Special Collections Division of the Main Library, Nashville Public Library.
General Note
One periodical and seven books from the donors were catalogued separately (and listed as "Separated Material" in the finding aid), and donated copies of articles were placed in the Nashville Room's Cornelia Fort vertical file.
General Note
Note concerning D.E. Proctor recording: Track 1b of this recording was recorded at a slow speed, garbling the recording. An effort by Library staff was made to redress this matter, but met with very limited success. The track remains very difficult to understand. The other two tracks of the recording are unaffected.
Restrictions on Access
In library use only. Available by appointment.
Restrictions on Access
Restriction: Box 5 and 1 glass negative restricted to staff use only.
Description
Abstract: These materials center on aviatrix Cornelia Clark Fort, the first female pilot to die on active military duty, during World War II. The collection chronicles Corneliáђةs career and death through correspondence, official documents, photographs, and a few artifacts, as well as oral interviews and other research collected by Doris Brinker Tanner and Rob Simbeck. The collection touches briefly on the extended Fort family and includes four letters (Nov. 1855 ́ђأ Feb. 1856) from Edmund Augustus Fort to his wife, Julia, while he served in the legislature in Nashville, representing Robertson County.
Preferred Citation of Described Materials
Cite as: Cornelia Fort Papers, Special Collections Division, Nashville Public Library.
Terms Governing Use and Reproduction
Copyright held by the donors was granted to the Nashville Public Library by deed of gift. Other portions of the collection to which the donors did not have copyright, such as photographs, oral interviews, and possibly other materials, may be protected by copyright law (Title 17 U.S. Code)
Terms Governing Use and Reproduction
Some items may not be able to be photocopied, due to the fragile nature of materials.
Terms Governing Use and Reproduction
Photographs credited to Associated Press, Tennessean, Wide World Photo, or other organizations or entities (except for Nashville Banner) cannot be reproduced.
Terms Governing Use and Reproduction
Audio recordings cannot be reproduced without Division Manager's approval.
Immediate Source of Acquisition
Three of Cornelia Fort's nieces donated the material: Lee LaPointe, Tish Fort, and Chloe Fort;,Gift;,2004.,Acc. 2004.006.
Biographical or Historical Data
The Fort family has been in Middle Tennessee for generations. Much of their history occurs in Robertson County, but this collection focuses on Cornelia Fort of Nashville and her immediate family. Her father, Dr. Rufus E. Fort, was a surgeon, and he was co-founder, vice president, and medical director of the National Life and Accident Insurance Company in Nashville. He met and married Louise Clark in Boston in 1909. They moved to Nashville and settled at Fortland, the family farm in East Nashville where they raised Jersey cows. The couple had five children, Rufus Elijah, Jr., Dudley Clark, Garth Edmund, Cornelia Clark, and Louise Clark.
Biographical or Historical Data
Much of the collection documents Cornelia. She was a flight instructor in Hawaii, and witnessed the Pearl Harbor attack on Dec. 7, 1941 from the air. She spoke and wrote frequently about this experience. In 1942, Cornelia joined the Women's Auxiliary Ferrying Squadron (WAFS) which ferried military planes to various bases around the United States during World War II. On one such mission on March 21, 1943, another plane struck hers, and her plane crashed to the ground, killing her. With Congresss official declaration in 1977 that members of the WAFS and the subsequent organization, Women Airforce Service Pilots (WASP), were active military personnel, Cornelia became the first American woman pilot killed on active military duty.
Biographical or Historical Data
Doris Brinker Tanner, a fellow World War II female pilot, studied Cornelia's life thoroughly and developed relationships with Cornelia's siblings, nieces, and nephews. Author Rob Simbeck also became friends with the family, and in 1999 wrote the biography "Daughter of the Air" about Cornelia.
Language
In English.
Cumulative Index/Finding Aids
Finding aid available in repository;,folder level control,https://assets.library.nashville.org/documents/finding-aids/Special_Collections_Division_Finding_Aid_CorneliaFortFArevOct2013.pdf.
Ownership and Custodial History
Collected by Fort family members and in their possession at the time of donation.
Action
Process;,2006;,Johanna Russ, intern, under supervision of Leanne Garland.
Action
Reprocess;,2012;,Margaret Koenig, intern, under supervision of Linda Barnickel.
Action
Revise description and cataloging;,2013;,Linda Barnickel.
Accumulation and Frequency of Use
No further accruals are expected.
Borrower Reviews
Citations
APA Citation (style guide)