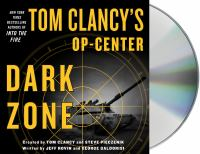 In Dark Zone , a race-to-the-finish thriller in the New York Times bestselling Tom Clancy's Op-Center series, the brutal murder of an undercover agent reveals a plot to incite a full-fledged war between Russia and Ukraine.

Former US Ambassador to the Ukraine Douglas Flannery meets with an old friend and former spy near New York's South Street Seaport. She is seeking his help to thwart a Russian plan to overrun her native Ukraine, but those for whom she is working propose an infinitely more dangerous scheme, one that could draw in NATO forces and possibly ignite World War III. Moments later, as she jogs along the East River, her throat is slashed.

Within hours, Op-Center learns of the killing and alarm bells go off. Director Chase Williams and his team have been following events as Ukraine, her NATO allies, and Russia rapidly deploy forces in a dangerous game of brinksmanship. But the secret that Flannery has learned threatens to take the looming battle to a whole new and very lethal level. Using cutting edge techniques of cyber warfare and spycraft, Op-Center must respond to the rapidly unfolding crisis before the U.S. is forced to take sides in a conflict that could change history.

General Note
Title from web page.
General Note
Compact discs.
Participants/Performers
Read by Henry Leyva.
Description
The brutal murder of an undercover agent reveals a plot to foment a full-fledged war between Russia and Ukraine. Former U.S. Ambassador to the Ukraine Douglas Flannery meets with an old friend and former spy to help thwart a Russian plan to overrun her native Ukraine; but the group she's working for is planning a much more dangerous scheme in order to draw in NATO forces--and possibly ignite World War III. After the spy is killed following their meeting, Director Chase Williams and his team in the Op-Center must use cyber warfare and spycraft in tandem with Douglas's information to prevent the United States from being forced to take sides in a crisis as Ukraine, its NATO allies, and Russia rapidly deploy forces in a dangerous game of brinksmanship.
Similar Series From NoveList
Similar Titles From NoveList
Similar Authors From NoveList
Borrower Reviews
Editorial Reviews
Published Reviews
Reviews from GoodReads
Loading GoodReads Reviews.
Citations
APA Citation (style guide)

Note! Citation formats are based on standards as of July 2010. Citations contain only title, author, edition, publisher, and year published. Citations should be used as a guideline and should be double checked for accuracy.
Staff View
Grouped Work ID:
04ae936e-c9fc-9c98-e74b-c3ecf6071687
Go To GroupedWorkView in Staff Client